The New Zealand Motoring Writers’ Guild has released a list of ten new vehicles which have been selected as finalists to compete for the 2020 New Zealand Car of the Year title.

The Guild represents more than 20 motoring journalists from around the country and is considered to be the most prestigious of the annual New Zealand Car of the Year awards, given its longevity over more than three decades as well as being a truly independent assessment of a new vehicle’s qualities and attributes across a broad range of criteria.

“This year will go down in history for a whole variety of reasons, but the reveal of the finalists culminating with the announcement of the winner will mean a positive finish to 2020 for one brand in particular,” said the President of the New Zealand Motoring Writers’ Guild, Richard Edwards.

“After many tumultuous months full of Covid-related twists and turns, it will be a welcome relief to farewell what has been a challenging period with the announcement of the 33rd winner of this coveted trophy.”

“This year’s top-ten reflects the strong influence that SUV and Crossover variants now have on the total new vehicle market, so it’s no small wonder these models make up the majority of finalists,” said Mr Edwards.

On average, in excess of 50 new models from more than 30 different brands are launched in New Zealand every year, although this number was down in 2020 due to supply restrictions associated with Covid-19.

“Given these numbers, the Guild takes great responsibility in determining the winner of the New Zealand Car of the Year accolade as our decision contributes to and influences the buying decision of many Kiwi motorists,” said Mr Edwards.

“New car buyers can rest assured that the winner is absolutely deserving of the title as it will have undergone extensive testing and excelled across a wide variety of measures, especially when compared with other finalists.

“It takes a very special vehicle to be crowned the New Zealand Motoring Writers’ Guild New Zealand Car of the Year, an endorsement which represents a significant accomplishment for any new model.”

The 2020 winner will be revealed live on ‘Seven Sharp’ during the first week of December.

The top-ten finalists in alphabetical order, as well as quotes from brand representatives, are as follows:

“Being acknowledged as a contender of the New Zealand Car of the Year title is a huge accolade for the Audi Q3. The Q3 has been part of the Audi SUV stable for many years and has a wide range of offerings from 2wd to Quattro all-wheel drive and petrol and diesel powertrains. Importantly, Kiwis love of performance is delivered through the SQ3 which makes up 50% of our sales. Now the SUV has been joined by its design focussed brother, the Sportback, offering a coupe style which will allow the family to grow further.”

“It’s great news that the Ford Fiesta made the Top Ten list this year and is heartening to know driving excitement and pure, gear-changing fun still matters! The Ford Fiesta ST stands out in this regard, especially in a world where SUVs dominate and the manual transmission is becoming increasingly rare.”

“The strong reaction from the public ahead of the introduction of Seltos clearly indicates that we have another winner on our hands.”

“To have the new Defender 110 acknowledged for the New Zealand Car of The Year Award is a true testament to the excellent capability, durability, design and technology of this vehicle. The new model represents 70-years of innovation and improvement; honouring the vehicle’s history for rugged solidity whilst remaining a Defender for the 21st century. Since launch, the Defender has shook the SUV market and seen remarkable sales success, selling out of our first two vehicle shipments in just weeks. The launch of the new Defender is one of the biggest automotive launches of the year and one of the most memorable of my career, this is a vehicle I am incredibly proud of.”

“We’re delighted the Mazda CX-30 is a finalist. It is recognition of the amazing job the Mazda design team did in creating an outstanding looking vehicle that brings together the flowing proportions of a coupe with the versatility of an SUV.

“Reaction from NZ Motorists has been very positive as it has provided a great alternative for people who want the versatility of SUV without the need to move into a larger vehicle.”

“As New Zealand’s best-selling luxury vehicle company, we are honoured to be acknowledged by the New Zealand Motoring Writers’ Guild in 2020. Both the EQC and GLB are part of Mercedes-Benz new SUV offensive, contributing to the biggest range of SUV’s for sale in New Zealand. To have two models in the running for the top ten is immensely satisfying, and I thank the entire team that helped bring these models to market.”

“We are ecstatic the all-new Peugeot 2008 SUV has been recognised by the New Zealand Motoring Writers’ Guild as a top-ten finalist in their annual New Zealand Car of the Year award. We said at launch the 2008 SUV is anything but ordinary, and this nomination is proof that the judges agree.

“The nomination builds on international accolades bestowed on the new model and we’re quietly confident it could enjoy similar success here in New Zealand when the winner is announced in December.

“It’s been more than 30-years since Peugeot last claimed the prestigious title when the 405 won in 1989, so it would mean a lot for the brand if the 2008 SUV was to be presented with the award.”

“We are thrilled that our first compact SUV to our family of ŠKODA models has made the New Zealand Motoring Writers’ Guild New Zealand Car of the Year top-ten! KAMIQ is the ‘Perfect Fit’ to our SUV line-up, one which is set to become a pillar of our ŠKODA model range as a whole.”

“It’s great to see Toyota featuring again in the top-ten for New Zealand Car of the Year, as we continue to strengthen our range. The Yaris hybrid is spearheading a whole range of new product, which is the best range of vehicles we have ever offered.” 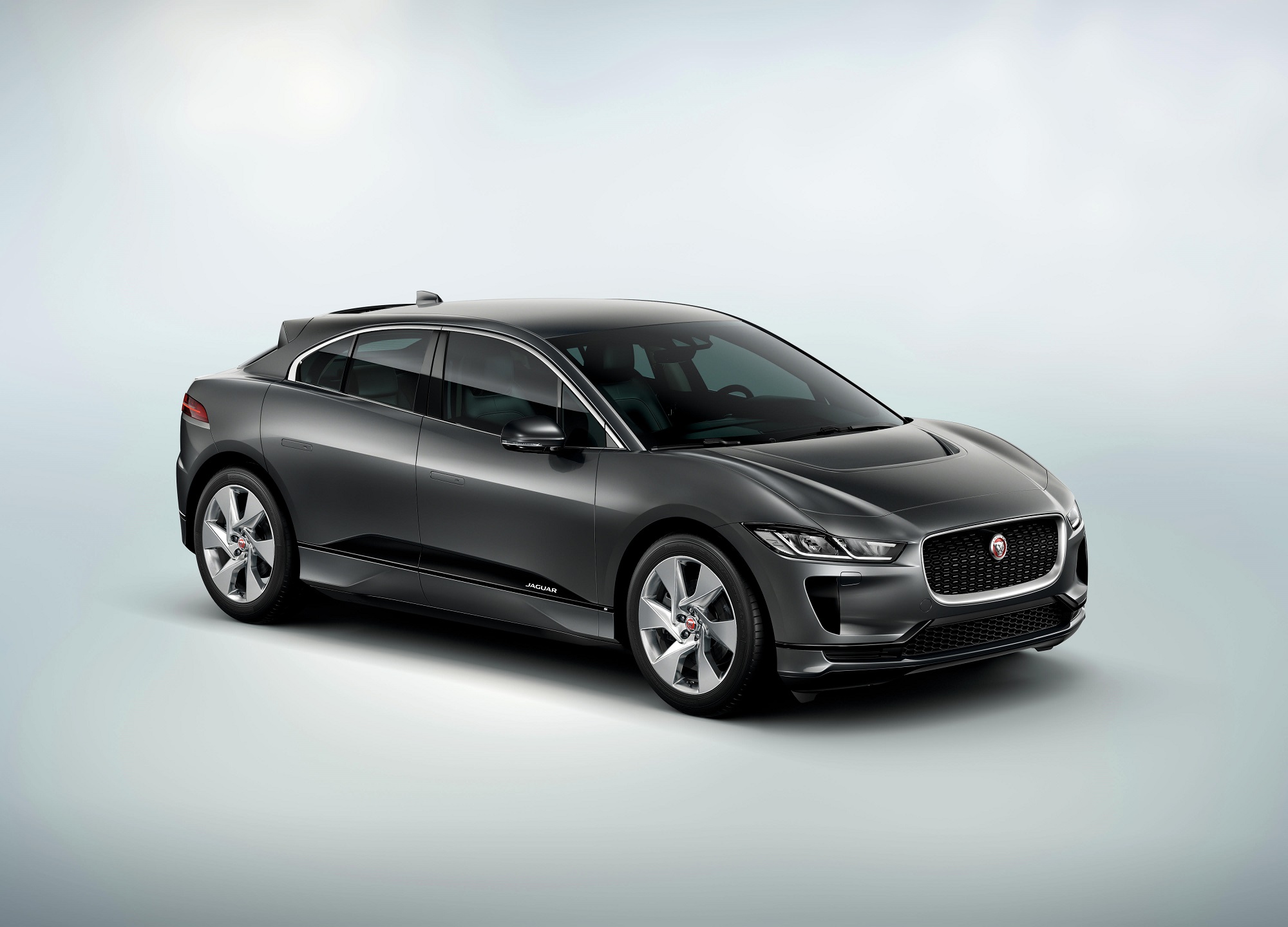 The Jaguar I-PACE has been named the 2019 New Zealand Car of the Year – the first time a vehicle available only as a full battery electric vehicle has won the award.

The BMW i3 was the first plug-in to win the award in 2015, but at the time was offered with a range-extending petrol motor.Members of the New Zealand Motoring Writers’ Guild reviewed and voted for the SUV throughout the year. Guild president Richard Edwards says the I-PACE’s innovative design and feature set led to its selection as this year’s overall winner. “We are delighted to name the Jaguar I-Pace as the 2019 New Zealand Car of the Year. With it already holding the 2019 World Car of the Year title, it is a real endorsement of our independent voting process.”

“The Jaguar I-Pace is an impressive car. Its unique design offers buyers the chance to have both a sports car and SUV at the same time, while also offering the latest in convenience and safety features. The fact that it is all-electric with a very usable range is an absolute bonus. New Zealand is ideally placed with its huge share of renewable energy to make the most of the advancements in electric vehicles the new vehicle industry is providing us,” he says.

Jaguar NZ general manager Steve Kenchington says the award caps off an exceptional launch for the new model which has been a pioneer in the premium EV category. “The I-PACE won an unprecedented three awards at the World Car of the Year as well as more than 70 international awards including Car of the Year awards in more than a dozen countries – from Canada through to Germany since its global launch. The acknowledgement from New Zealand’s Motoring Writing Guild members, a highly experienced group who have reviewed hundreds of vehicles from almost every marque available on the market today, is particularly gratifying for the Jaguar team at a local level. Today’s award is recognition of the hundreds of hours that have been invested by world-class engineers and designers in developing the technology behind the I-PACE,” he says.

The 21 voting members of the Guild evaluated the I-PACE against a range of criteria including how the vehicle performs its intended role; its styling, interior design and accommodation; fit, finish and quality; ride and refinement; performance; road-holding and handling; value for money; active and passive safety and environmental responsibility.

The award is open to all cars, SUVs and utes launched over a 12-month period. To be eligible for the award they must be driven by over two-thirds of the 21 voting members of the guild for at least 72 hours. Testing is undertaken in the member’s home environment, not on a track. This allows voting to be based on the same experience an owner would have, using the car in their day-to-day life. The award itself is named the Peter Greenslade Award, after late member Peter Greenslade. 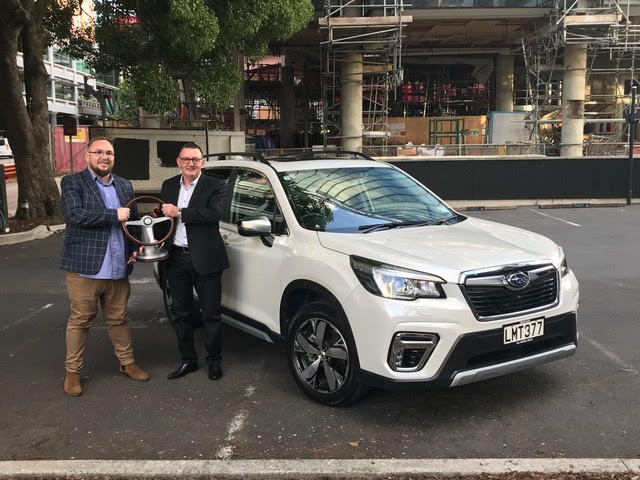 A family-friendly SUV has beaten tough competitors to win the 2018 New Zealand Car of the Year.
The Forester is the first Subaru to take the New Zealand Motoring Writers’ Guild’s accolade and also only the second sports utility to take the prize, the first being the 2017 holder, Skoda’s Kodiaq.
Ten finalists competed for the Peter Greenslade Trophy, which is in its 31st year and stands as the country’s only independent motoring award, with guild president Richard Edwards noting that voting was very close.
The Guild represents professional motoring commentators from as far north as Kerikeri and as far south as Dunedin.

Edwards, of Auckland, says Forester is the kind of vehicle Kiwi buyers now want. “It offers the durability and functionality Kiwi families desire, also now implementing next generation safety technology. And in starting at $39,990 it is truly affordable for new car buyers.”
New Zealand Car of the Year convener David Thomson, Dunedin, noted Subaru has kept the Forester true to its go-anywhere roots. “On gravel or even unpaved roads, the new Forester is – by lifestyle SUV standards – exceptionally accomplished and surefooted.”
Guild vice president Richard Bosselman, Palmerston North, said the latest model’s cutting-edge safety technology deserves attention. “Traditional toughness and real-deal ability keeps Forester sweet with loyalists, genuine cutting-edge safety and assists deserve attention from a whole new audience.”
Subaru of New Zealand managing director Wallis Dumper commented that if New Zealand motoring journalists considered the car the best then “who are we to argue?”
“We … knew when the fifth-generation Subaru Forester arrived that we had a pretty special vehicle on our hands.”
The model is Subaru’s strongest seller globally and he envisaged this prestigious award would further elevate its status
“Thank you to the New Zealand Motoring Writers’ Guild for taking the time to evaluate the Subaru Forester and recognise how incredible it is.”
Other finalists this year were the BMW X3, Holden Commodore, Hyundai Kona, Kia Stinger, Mercedes-Benz A-Class, Skoda Karoq, Toyota Camry and a pair of Volvos, the XC40 and XC60.
The award was presented on TVNZ’s Seven Sharp current affairs programme tonight.