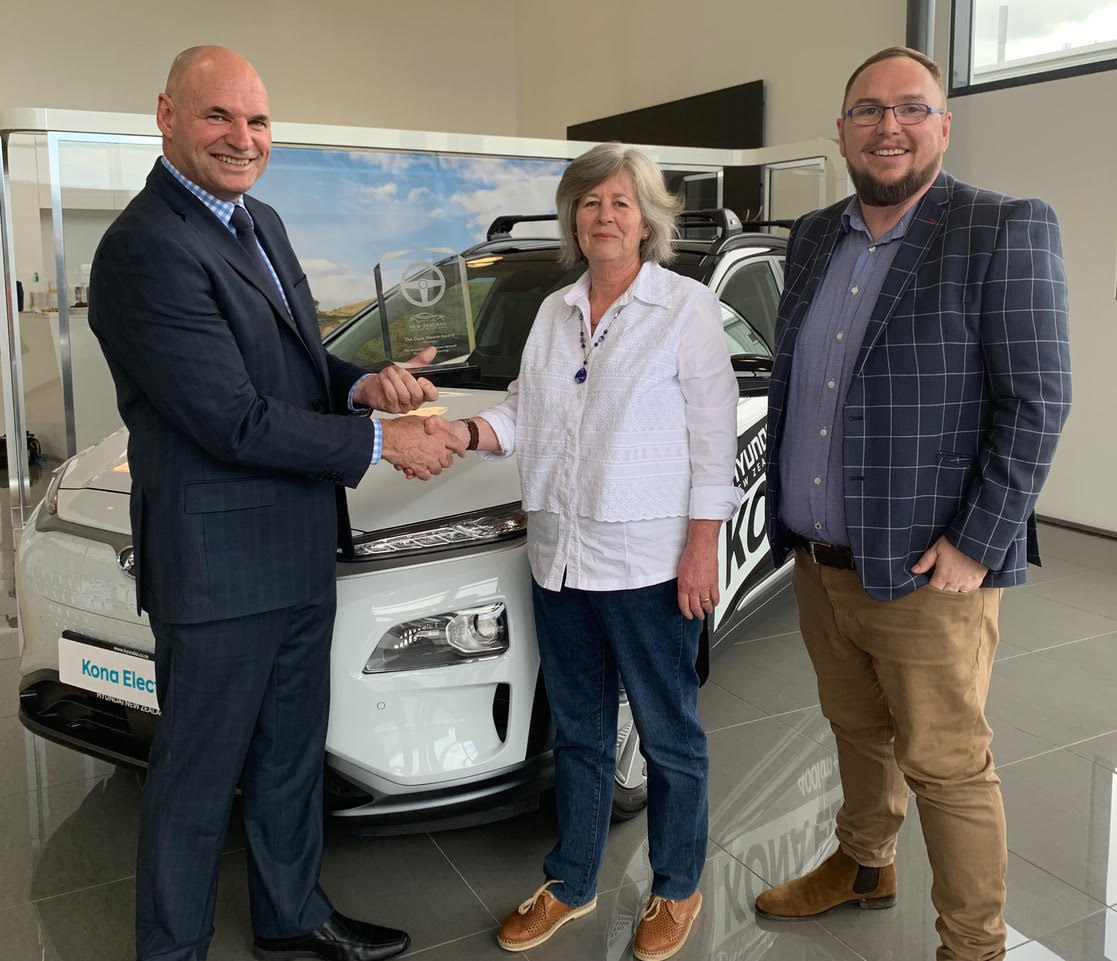 The Dave Moore Award was presented to the Auckland-based distributor yesterday. This is a new prize, decided by the New Zealand Motoring Writers’ Guild, which represents the majority of this country’s journalists writing about automotive affairs.

“Hyundai internationally is mounting a $32 billion technology push in this area and it is a great credit that its affiliate here, a wholly New Zealand-owned company, has been an impressively early ambassador for the brand’s latest battery-driven products,” says Guild president Richard Edwards.

Besides electric and self-driving cars, South Korea’s largest car brand is also planning investment spanning the next five years in fields such as artificial intelligence, batteries and hydrogen energy, as well as start-ups.

Within the past two years Hyundai NZ has launched hybrid, plug-in electric and fully electric editions of the Ioniq hatch then followed up with an EV edition of its Kona compact crossover.

The fully electric variant’s delivery of a single charge range of 450 kilometres is a breakthrough in that it truly settles range anxiety and also provisions at a markedly lower price than any other present or immediately impending EV of similar capability.

They have also indicated a willingness to bring the hydrogen fuel cell-powered Nexo SUV to New Zealand for a trial, and have been open on the idea of similarly powered trucks.

“The electric vehicle scene is a hot spot here and Hyundai is very much setting the temperature in the sub-$100,000 sector,” Edwards says.

“Yes, battery technology unavoidably carries a premium, yet the fleet and private sector interest in the Hyundai product is significant enough to suggest that it is clearly not out of the reach of everyday drivers.

“The brand effort here is certainly worthy of celebration, which is why we are delighted it is the first recipient of our award, recognising innovation that moves forward NZ motoring and also honouring a national motoring media identity.”

Dave Moore, of Christchurch, who passed away in May of 2017 at age 67, was born in Wales and became full-time motoring editor for his adopted home town newspaper, The Press, in 1992. He shifted into a national role, until 2015, after that publication became part of what was then Fairfax Media. This, and his involvement with other media, made him a household name.

“The Dave Moore Award, which is colloquially known as ‘The Ruby’ in reference to his wee dog who was as much a part of his life – and stories – as his family, is in tribute to a colleague whose particular interest was in technology advancement and design,” Edwards says.

Dave’s widow, Trish, was a guest of the Guild for the handover, to Hyundai New Zealand general manager Andy Sinclair.

“It’s an honour to receive this inaugural Dave Moore Award in recognition of our commitment to new technology and innovation,” says Sinclair.  “We are committed to leading the charge in electric vehicles with Hyundai New Zealand being among the first in the world to introduce the IONIQ which has become this country’s best-selling new 100% electric vehicle. We also recently launched the Kona, New Zealand’s first compact electric SUV to unprecedented demand.” Sinclair adds, “It’s an incredibly exciting time for New Zealand and we look forward to the continued growth of Electric Vehicles and other alternative fuel technology.”

The Guild intends to present the Dave Moore Award annually, with Edwards noting that the level of automotive technology upload into New Zealand has historically run at high pace.